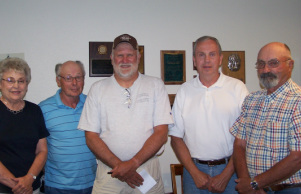 The East Side Board of Supervisors
Conservation Districts are locally led by publicly elected officials recognized as conservation district supervisors. Most of the district supervisors have followed generations of family members who have also served as District Board Members.
The East Side Board consists of seven (7) members who volunteer their time, with a  chairman, v ice chairman, sectary/ treasurer  and district Administrative assistant, most have outside jobs and are also farmers who practice conservation at it's fullest. The East Side SWCD is unique according to it's geographic boundries and is  unified in their efforts to provide non-regulatory, incentive-based assistance to private land owners and land  users in the conservation, sustainment, improvement and enhancement of Idaho's natural resources. This effort is successfully executed through the decicated work of the District Supervisors, district staff, and parterships at the local, regional, state and federal level.
East Side Supervisors Pictured from L to R
Kathy Weaver, Jerry Kienlen, Matt Woodard Chairman
Craig Jensen Secretary, Delbert Winterfeld
Missing from picture
Ryan Blatter Vice Chairman