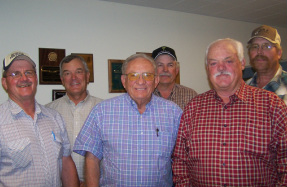 The West Side Board of Supervisors
Conservation Districts are Public Bodies and their supervisors are publicly elected officials that serve a four year term, most supervisors have served for a decade or more and have followed in the foot steps of family members who also shared in the conservation districts vision's and practices. The West Side SWCD consists of   seven (7) board supervisors who are not simply interested residents,  farmers and ranchers forming a social group, but are active participants in a unified effort to provide non-regulatory, incentive-based assistance to private landowners and land users in the conservation, sustainment, improvement and enhancement of naural resources. This effort has been successful due to deciated work of the District Supervisors, district staff, and parterships at the local, regional, state and federal levels.
The West Side SWCD is unique in it's geographic boundries, as part of the district is in Jefferson County, and the current SWCD board supports the original board's philosophy of involvement and commitment t0 resource conservation. With equal dedication The SWCD is working to improve
and protect  the natural resources of the West Side SWCD.